Although some claim it may well take 80 days to take a world-wide trip, for this particular globe, one need only proceed to their nearest garden plot. 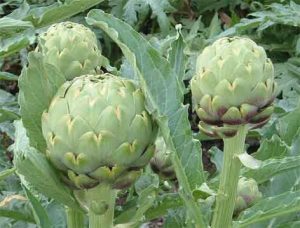 The globe artichoke, Cynara cardunculus var. scolymus (also known as green or French artichoke) has a most incredible, well, global, history. It was first noted by the Greek philosopher and naturalist, Theophrastus, 371-287 B.C. How amazing is that?

Its story continues. Pedanius Dioscorides (40-90 A.D.), a Greek physician, noted artichokes about the time of Christ. Ancient Greeks and Romans considered them delicacies and aphrodisiacs, and they were said to secure the birth of boys. They were also cultivated around 800 A.D. by North African Moors.

The artichoke, a thistle member of the aster family (Asteraceae), also has its own legend that might be the source for its scientific name.

As told long, long, ago, when the Greek god Zeus saw a beautiful young mortal called Cynara, he transformed her into a goddess. However, when Zeus discovered that a homesick Cynara had snuck away to her mortal world, he was so angry that he turned her into an artichoke. Hence, Cynara cardunculus, var. scolymus.

It’s also thought the Saracens introduced artichokes to Italy. This may explain how “al-qarshuf”, Arabic for thistle, became “articiocco”, and “articoclos”, (meaning pine cone), in Italian. Eventually it became “artichoke” in English.

They were cultivated in France in the mid-1500s and later appeared in print in Martha Washington’s 18th-century Booke of Cookery in the recipe “To Make Hartichoak Pie.” However, their roots didn’t touch U.S. soil until the 1800s when they arrived courtesy of Italian immigrants who, for a short period, cultivated them commercially in Louisiana.

In the early 1900’s, Andrew Molera leased his land in Salinas, California, where he encouraged sugar beet-growing Italian farmers to propagate, you guessed it, artichokes. Although that area of California is ideal, artichokes will grow in most home gardens.

This incredible perennial plant puts out a plentiful offering, whether in the landscape or vegetable garden. Even if you don’t indulge in eating its buds, its 5–6” diameter dusky-sage deeply-cut leaves gracefully arching like huge wings will illuminate your landscape.

As spring progresses, ridged stalks will shoot up nearly 4’ high to present pinecone-shaped buds (those edible “vegetables” we consume). But that’s not all. When left to develop further, buds explode into the most extraordinary brilliant violet-blue flowers. They’re truly a crowning glory to behold.

Purchase plants (getting desirable plants from seed is very unpredictable) to put out in early spring so you may dine and be dazzled by summer.

With nutrient-rich, well-drained soil in an area with afternoon shade, generous irrigation and supplemental fertilizing, your artichokes should survive and thrive, thrilling you for many years to come.

Juice and zest from one lime

Steam artichokes in strainer of large cooking pot over low heat for 50 minutes.  Remove from heat and let cool enough to handle.  Press down with palm of hand to loosen leaves enough to part and remove furry choke from middle.

Fill cavities of artichokes with mixture and microwave them one at a time, (cover with plastic wrap or silicone cover) 2 minutes on high.  Sprinkle with fresh basil leaves or parsley and sliced almonds.  Serve with pesto for dipping leaves.

Makes 4 servings (may easily be halved for 2)