Skip to main content
Close Search
All Posts By

Immunity Enhancement for Tomatoes and other Night Shade Plants

If your tomato plant gets sick just give it an aspirin. The common aspirin tablet (uncoated, non-buffered) has been shown to create a systemic reaction in tomato plants that builds up the resistance to microbial disease. It is called an activator for local disease resistance mechanisms including systemic acquired resistance (SAR).

Common (uncoated) aspirin is acetylsalicylic acid. Dissolving one tablet (approx. 350 mg) in pure water and then applying it to the leaves of your tomato plants (as a foliar application) will trigger a systemic acquired resistance (SAR) which tells the tomato that something is attacking it and it needs to build its immune defenses. Since you are applying this to the plant before the microbes are attacking, the plants are ready to better defend themselves. Think of it as a vaccine for tomato plants.

This application seems to work best when applied approximately every two weeks.

This can also be applied to the roots of plants but double the quantity. “Take two aspirins and call me in the morning.” 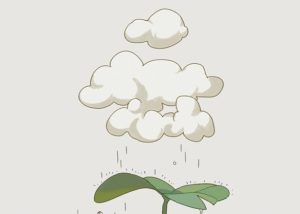 This year we have had two very successful water projects. First, we had the Emergency Water tanks when the well pump was offline. More recently came the installation of the Rain Catchment System by Sage Hill Landscapes.

As you may or may not recall, last January our irrigation pump at SOREC was shut off due to the low water table. But we had a challenge. We needed to continue to water our newly propagated plants and seedlings. A few of us got together and located small 250-gallon (caged) tanks at a very reasonable price. We applied for a grant from the Jackson Soil and Water Conservation District (https://www.jswcd.org)  and received a reimbursement grant. It was valuated at $1/gallon. In this case, it meant a maximum of $2,500 in total reimbursement. We were reimbursed for the entire amount of the emergency water system we created to irrigate the propagation underway in Greenhouse #2. 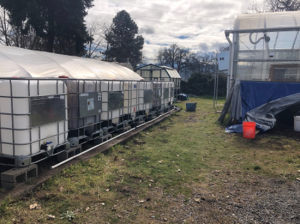 The other project was to install a permanent Rain Catchment System so we would not need to pay for emergency water if that was needed. The project also served to demonstrate how a rain catchment system works and how easy it is to implement on nearly any home, farm or ranch.

In fact, the Rain Catchment Project was ongoing when we encountered the emergency water need. We received a very favorable bid from Sage Hill Landscapes. They even donated one of the holding tanks to help us out in our pricing. 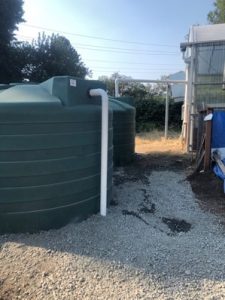 approval for a reimbursement grant with a maximum payout equivalent to the amount of water we would collect. In the case of our system, it was 5,000 gallons and therefore a maximum grant of $5,000. However, there were some challenges and JSWCD’s request list was long. We only received $2,500 in reimbursable grant funds. Thanks to a GoFundMe project that Lynn Kunstman initiated, we received nearly $10,000 in contributions.

Thanks need to go to the Water Committee: Lynn Kunstman and Susan Koening without whose assistance these projects would not have happened.