Blackbirds in my Garden

By Julie EnglesonMarch 2, 2017The Dirt 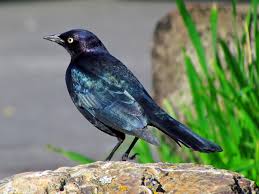 For those of you who like to “Let things Be” in your garden…this story is for you, and it’s true.

I love to see what happens if I allow various food plants to grow beyond their edible stages for many reasons. Sometimes it’s to look more closely at the flowering/bolted stage of something, if there is a particularly beautiful flower involved (think artichokes here), but usually it’s for seed collection. Some of my closest friends chide me and say my garden looks “messy” when I allow these plants to grow. I’m never insulted by this because they don’t understand my secret: in another life I was a plant and animal detective. Yes, I’m joking here, but I do love to see the evolution of all things growing and changing, and I have been known to take notes (and pictures when I’m able) of the craziest things I’ve been so lucky to see.

One such year, I had planted some green onions in early spring. There were many of them (four rows in a raised bed, ten feet long), so after eating many at the young and tender stage, I chose to allow a half-row to bolt and go to seed. The stalks and leaves of these onions in summer were still green, but large and very fibrous (as you may know, the leaves when older become hollow on the inside, while the exterior is still very much alive and “juicy.”)  Upon examination I was noticing what appeared to be scrape-marks down the sides of my bolted onion stalks and wondered what was making those marks?  As the marks appeared to look like injuries to the plant (brown, almost like a scab) I was concerned I had a pest attacking my onions.  I became vigilant at watching my garden plot just to see what I might be missing. And then it happened…

One day, I was sitting in an adjacent part of my garden; a nice, shady grapevine-covered spot where it’s cool and quiet on a hot summer day. This is a great place to spy on birds at a feeder nearby and watch them as they splash around in the birdbath. When suddenly, I saw movement on the onion stalks…they were Brewer’s blackbirds (Euphagus cyanocephalus!)  What were they doing?  I sat very till, and held my breath. They were grasping the stalks with their feet, while running their beaks down the sides of the juicy, fibrous stalk. Ah, ha! That explained the marks I’d seen on my plants, but what were they doing now?  I could hardly believe my eyes: they would strip juice from the plant and then tuck their beaks under their wings! My first thought was, “How odd,” but then I really started thinking about it. Maybe it was perfume? Or perhaps it was deodorant?  Then I remembered seeing some wild birds ‘dust’ under their wings with dry soil; chickens will do this. I have also learned that birds do this to prevent or lessen the prevalence of lice.  HOW CLEVER!

Sooooooo, long-story short, leave some of those plants in your garden to grow. Live and let live, and in the process, learn something interesting. Not only will you get to see the full-circle life span of an annual, you might just get to witness some very curious bird behavior at the same time!