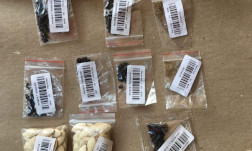 Noxious weeds and a bug larva have been found in the mystery seed packets from China that were sent unsolicited to thousands of residents across the United States in the last few months, the U.S. Department of Agriculture says.

Most of the seeds examined were common garden seeds, like marigolds and herbs. The weeds were a variety of water spinach and dodder, a stringy vine that can choke out large native plants and even large areas of native woodland, the USDA said. The bug larva was a type of leaf beetle that consumes and destroys leaves of native plants, agriculture officials said.

The weeds and the bug are already found around the U.S.

The Oregon Department of Agriculture said it was aware of the reports. They advise that you do not open the package. If you have already opened the package, place the entire package in a plastic bag, seal it, and send it to Oregon Department of Agriculture, Plant Protection and Conservation Area, 635 Capitol Street NE, Suite 100, Salem, Oregon 97301