Geraniums give way to pansies 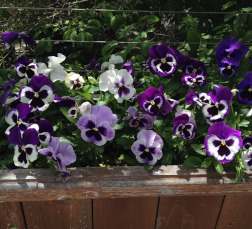 Summer and fall of 2019 were grand as three bright red flowering common geranium (Pelargonium spp.) plants and two poignant deep blue Lobelias filled the 8’x20’ planter. Their show stopper colors caught the eyes of all who walked on the main patio.

Winter followed with a harsh cold snap that brought the five plants to a withered halt. But this year, something new happened because growing did not end there. Pansies (Viola tricolor var. hortensis) were put in to draw our eyes to yet a new texture and eye candy color scheme in this planter that lasted through winter’s dark days well into early summer.

More potting soil was brought in to fill the planter to the top. Then a good granular fertilizer mix (not a time-release) was shoveled in with a hand trowel. Last, I enjoyed arranging the three separate color varieties I bought – purples, lavenders and pure white – in patterns. In previous years, the bare dirt had just waited until spring for planting. This time, I had eight other planters, so three flats of pansies were purchased for color experimentation. Here’s the schedule I followed:

Mid-February: Planted pansies as described above.

I was surprised I found healthy pansy plants (being it was so late in pansy planting recommendation time). A local nursery ordered them for me when they ordered their own late winter supply, so I brought home 72 pansies in pony-packs.

Many days I over-watered and discovered if I let them dry out a little between watering it made for stronger plants overall.

3 to 4 times a month I deadheaded most of the spent blooms into early summer. I pinched them off right at the base where blossom stems attach to the branch. (They were in partial shade under a dogwood tree.)

I was completely amazed at how vibrant these plants were: Some stems were over five inches long – perfect for using for bouquets in the house.

Whether for indoor bouquets or outdoors in the planter, the colors are intoxicating for conversation starters. Pansy faces are fun and I can even see an eagle in flight.

Pansies are a simple color boost for winter gray days. What have you got to lose?

Nothing! In fact, the nursery I worked with in February is gearing up for pansies right now. Autumn is around the corner…