My friend, Kate! How lucky am I to have Kate Hassen as a good friend! I first met Kate when she took the Master Gardener class in 2013. On the first day, she was sitting in the back of the class. After 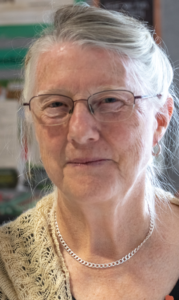 lunch, I was extolling the virtues of reducing waste, demonstrating how little waste over 100 people had produced from our group lunch and using my own home waste management as an example. A hand shot up in the back of the room. “Well, how many people live in your house? The amount of waste would depend on the number of people!” I knew right away I was going to have to be on my toes with this one!

Kate had recently retired after teaching in the Medford School District. She realized that most of her friends were work friends who were still working. She hoped that new friends with a common interest could be found by becoming a Master Gardener and she jumped in with both feet!

After graduating, Kate volunteered to be a mentor in the Practicum, a position she holds to this day. She also volunteered to join the Board of Directors as the Membership Secretary for 2014 and 2015. In 2015, she was chosen to be the 2016 President-Elect. She turned out to be the President-Elect Extraordinaire! She wanted to know about every aspect of JCMGA, so she attended the meetings of every committee, learned about every garden and got to know the leaders of every group. When she became President in 2017, she knew JCMGA inside and out! She had studied Roberts Rules of Order thoroughly to become an effective meeting chair. And, at the same time, she was co-chairing Spring Garden Fair.

After a stellar year as president, just as she was about to say, “WHEW! That’s over!” the 2018 president was forced to resign due to a family illness. So, what did Kate do? Well, of course, she let herself be persuaded to remain president for a second year! And, of course, she remained a SGF co-chair, participated in all those committee meetings, oversaw the restructuring of the board and creation of the first working groups, and helped tremendously with the construction of Greenhouse #2.

2019 saw Kate assuming the role of past president who is also the parliamentarian for the board. Once again, she was co-chair of the Spring Garden Fair, a Practicum mentor (where she led the Seeds Team), helped organize the GEMs (Garden Education Mentors) while co-chairing the Wanda Hauser Garden and worked on the yard sale and the Holiday Gala as part of the Fundraising Working Group. As if that wasn’t enough, she took on the chairmanship of the Communications Working Group where she united the various communication venues into one cohesive entity. Volunteers who work on The Garden Beet, Facebook, PSAs (Public Service Announcements), the JCMGA website, Mailchimp, technology, documentation storage, membership storage, technical support and training came together to form one working group that is becoming ever more effective in keeping association members and the general public informed about Master Gardener happenings.

Then the infamous year 2020 hit! Kate, through her involvement in the Practicum, GEMs, Fundraising, and the Communications Working Group has been instrumental in keeping JCMGA membership informed, encouraging members to maintain their status in the association, and doing everything allowed by Oregon State University to financially support JCMGA.

As the pandemic overlapped into 2021, though, Kate realized she was enjoying her time at home. Her own gardens had produced abundantly; the cupboards and freezer were full of the fruits of her and her husband Steve’s labor. She’s had time to read voraciously and her beautifully-knitted garments are flying off those needles. She has, therefore, decided to cut back on her Master Gardener duties. She wants to come to the Extension to garden and to enjoy her friends. She will be working in the Practicum and in the Wanda Hauser Garden.