Pie in the plant

Who would have thought one could produce a premium pie from an edible plant stalk? Apparently, no one.

But be forewarned – the leaves are toxic and should not be eaten.

Botanically a vegetable but often referred to as a fruit, Rheum rhabarbarum – otherwise known as rhubarb – has had a very long life on this good earth.

Although ancient in its origins, this hardy perennial is in the Polygonaceae, or smartweed-buckwheat, family.

Despite its apparent “smartweed” genes, rhubarb has long been prized for its medicinal qualities. Native to central Asia, it was used 5,000 years ago as a physic in China, as well by the ancient Arabs, Greeks and Romans. In 1271, Marco Polo found it in the mountains of Sukchu.

Although it was the root, not the “fruit” of rhubarb that was first sought after, it was so expensive that European pharmacists encouraged propagating it locally. 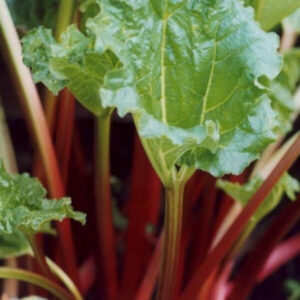 cultivation, France discovered the stalks produced a tasty, edible sauce. Leave it to those French chefs and their epicurean exploration.

British cooks were far behind liking this new food, (except mistakenly cooking the toxic leaves that poisoned those ingesting them). However, after accepting this vegetable, British scientists soon competed with Russians to produce a variety with stalks much more acceptable in taste and cooking quality.

As Queen Victoria was crowned in 1837, a startling new variety of rhubarb, Victoria, was introduced. It was easy to grow and reliably robust as well consistently tender and sweet.

A Victorian era favorite, the stalks were treated like fruit and were featured in pies (hence the name “pie plant”), custards, fools, jellies and jams. Its migration to the US resulted in many-acre rhubarb farms during the 19th century.

Although it fell out of favor after the World War II, rhubarb is today making a comeback as a popular plant.

Treated as a perennial in our zone, it grows to 2-3’ tall with a 3-4’ spread and produces flowers on towering 5’ stalks. Severing flower stalks during their nascent stage – which resembles rose-tinged cauliflower – produces more edible stalks. Alternatively, they can be left to unfurl into clouds of edible white blossoms.

For your spring garden plantings, either purchase crowns or get some from a fellow gardener willing to gift you with a division.

A heavy feeder, the “pie plant” prefers its soil well-drained (planting on a mound is most beneficial) and richly fertile with deeply dug organic matter. Consider propagating rhubarb in half whiskey barrel planters.

Well-rotted steer manure is favored for both mulching and fertilizing.

Rhubarb prefers full sun, but tolerates some afternoon shade and regular irrigation. Be patient – it is best to wait to harvest stalks until the second or third year of growth. Harvest by twisting or cutting off at the base.

Along with its stalks, you can also gift others with divisions of their own. So why not make rhubarb the apple of your next pie and plant?

If you’ve decided to plant rhubarb, order early since gardening has taken off during this past year of confinement and nurseries are running out of stock fast.

Recipe: Victoria’s no fool … this is great

(Similar to a mousse)

2 cups of rhubarb stalks, washed and chopped in pieces

Place rhubarb and sugar in a medium-sized heavy pot. Stir over medium heat until juices start to flow, then cover and simmer on low until tender, about 15 minutes. Uncover pot, then turn up heat to medium and allow some of juice to evaporate, about 15 minutes longer. Put cooked rhubarb into a bowl and set in the fridge to cool, about an hour. You can make and chill it overnight to complete the following day if desired.

Put milk in a measuring cup, then sprinkle gelatin on top and let it plump up, about 10 minutes. Dissolve gelatin mixture in microwave on medium power for about 30 seconds.  Stir until smooth and let cool on counter for about 5 minutes. Meanwhile, whip cream with vanilla and almond extracts and salt until soft peaks form. Drizzle in the gelatin mixture while whipping cream on low, then continue whipping on medium until stiff peaks form, about 1-2 more minutes. Gradually fold in the yogurt.

Pour over the cooled cooked rhubarb and swirl in so that streaks remain. Pour mixture into a clear glass (clear dishes show off the swirled fool), serving bowl or individual clear glass serving dishes and sprinkle the chopped toasted nuts on top.