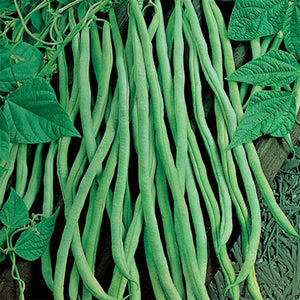 While there are many kinds and colors of green beans, there’s nothing quite like a French filet bean.

“Filet” actually translates as “string”—not because of unpalatable fibers holding the pods together but denoting their “string-like” shapes.

Filets weren’t always French either. Cultivated over 5,000 years in Central and South America, they were brought as dried beans by Columbus to Europe in 1493.

The first green beans cultivated prior to the 17th century were nothing like today’s beans. Likely tough and stringy, they were grown as garden ornamentals rather than as food.

Although first used dried, it wasn’t until the end of the 18th century in southern Italy that cross breeding produced more palatable beans consumed in their immature pod form.

Even with the development of Blue Lake truly-stringless beans in 1962, haricots verts remain the most tender, succulent and delicious green beans around.

While French filet beans may grow similarly to other green beans, that’s where it all ends. These slender-podded totally-stringless beans grow very straight and to remarkable lengths – up to 12” long. Although best harvested when the diameter of a pencil, they remain stringless and tasty when more mature.

Despite the famous filet bean with its dense, buttery flavor being the choice for American’s palates, it’s not commercially harvested. Filets are difficult to efficiently pick at peak flavor, so if you want them, you’ll only get them from your own garden.

To get more of these wonderful bean plants, as well as to beat chewing night critters, sow seed indoors. Start indoors in late April through the first part of May, about two weeks before the last frost date.

Presprouting beans is a great way to start your crop.  Place beans on wet paper toweling on a large dinner plate, then cover with a vented microwave dome. Unsprouted beans can be discarded before you waste planting duds.

Pot up sprouted beans (you might want to sprinkle in some inoculant bacteria to stimulate nitrogen-rich root nodes) in six packs after they have about 1” of growth.

Keep beneath a good light source until seedlings have some true leaves and are about 3-4” tall. Acclimate them outside about 5 days before planting out.

Lasting much longer than other varieties, you’ll be harvesting filet pods until the frost nips them in the tips! Then devour them steamed and buttered or grilled with olive oil and garlic…delicious and nutritious!!!

So, if you want the greatest green beans, just remember:

The more you toot, the better you’ll feel

When you offer your filet beans for many a meal!

Did you know there’s a National Bean Day?  Paula Bowen created it to honor her father (a pinto bean farmer). It celebrates both shelled as well green beans on Jan 6th. It’s also the date of Gregor Mendel’s death in 1884. An esteemed scientist and Augustine friar, the results of his pea and bean breeding experiments formed the basis of modern genetics. This in turn contributed to the beans we eat today.

They have Fortex (they grow to an amazing 10-12” long) and Monte Gusto, a pole wax bean with very long-straight pods. Both are stringless.

They have heirloom organic beans.

They have Fortex pole type beans.

2 cloves of garlic, peeled and pressed

Parboil beans in water to cover for about 2 minutes.  Drain.  Put beans in a zip-type gallon bag. Mix together in a small bowl the oil, garlic, minced rosemary, sea salt and pepper. Pour over beans. Seal bag and gently flip over several times until all beans are well coated.

Grill beans over low setting on grill for about 10 minutes until brown marks are visible. Serve immediately or cold. Makes about 4 servings.