This year, why not resolve to try and bear your cross by sowing seed for Raphanus sativus?  Even if you fall short, the heirloom Long Scarlet radish that grows 5 to 7 inches long on a thin root will bear one for you. 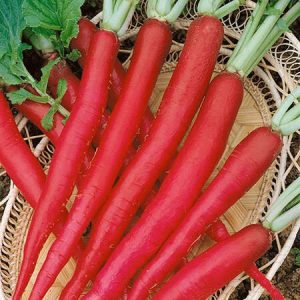 Radishes belong to the family Brassicaceae, along with mustards and cabbages. Cruciferae is another name for this important family and means “cross-bearing.” All maturing plants in the cabbage family have flowers composed of four petals that are reminiscent of a lovely white cross when blooming.

Radishes have been doing their part by providing sustenance for thousands of years since originating in China. Gradually spreading westward, they became important foodstuff for the Greeks and Romans.  They were extensively cultivated in Egypt during the Pharaohs’ reigns and were consumed there before the pyramids were constructed.

Radishes were first documented in Europe in Germany in the 13th century.  They were cultivated in England by 1548, Mexico in 1565, and finally made their way to Massachusetts in 1629.

Today, radishes are readily propagated just about anywhere and in nearly every US state.  The Brassicaceae family (including cabbage, broccoli, Brussels sprouts, cauliflower, kale, mustard and radishes) is of great economic importance, providing much of the world’s winter vegetables.

Their compact, pungent leaves can also be consumed (bet you hadn’t thought of that) by adding them to soups, sautéing them with olive oil and garlic, steaming them as a side dish or snipping some directly into your salad.  Delicious!  Move over arugula!

As for our featured star, the Long Scarlet radish, its tapered shape is similar to a carrot with a curved shoulder and distinct pointy tip.

The root’s vibrant, scarlet-pink skin is very thin.  The interior flesh is brilliant white, crisp and slightly sweet with a milder, peppery bite than most other radishes.

Unfortunately, for quite a long time, heirloom radishes were nearly replaced by the more familiar common round red radish. Seed for the Long Scarlet radish can again be found in select specialty seed catalogs.  Fortunately, someone reintroduced these seeds so we might again sow them in our own backyard gardens.

When those early birds get their worms, you’ll soon have your first Long Scarlet radishes if you sowed them in early spring.  When well-fertilized and provided with plenty of moisture, you could have your first taste in as little as three weeks!

Sowing directly in a fully sunny spot that’s loamy (add sand if compact) and well-composted is definitely the key for exceptional radish roots.  They’ll be sweeter and most tender the more rapidly they grow.

So, plan for that New Year’s cross-bearing with a Long Scarlet radish radolution!

Long Scarlet radishes may be named Cincinnati Market radishes in some seed catalogs.

Has both Cincinnati Market and Long Scarlet Cincinnati Organic seeds.

Mix slaw ingredients in a large bowl or 2-gallon zip type bag.  Combine vinaigrette ingredients in a small bowl and whisk together until mixed.  Pour over slaw and gently toss, or if using bag, close zip and gently flip bag over several times with hands until everything is mixed.