Sea You in the New Year

Got you thinking, “oceans?”  This “sea” is a plant, Hippophae rhamnoides. Hippophae translates as “shiny horse” which refers to its usage in horse fodder because it makes horses’ coats’ shiny. Sea Berry, sea buckthorn, is a most miraculous bush.

This deciduous, perennial woody plant isn’t well known in the US.  Even though introduced here from Canadian growers in the 1930s, if you want these beneficial and seemingly magical berries, you’ll have to grow your own. 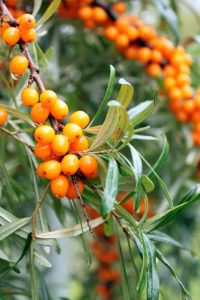 neighboring plants. Given full sun and good drainage, it will reward you with a “sea” of vibrant orange, nutrient-rich berries!

While Sea Berries are relatively new here, they’ve been traced back to 300 BC as mentioned in ancient Greek texts by Theophrastus. Also, Pliny the Elder referenced it in his natural history books in 77-79 AD.

Native to regions of Europe and Asia, it grows along seashores, sandy dunes, riverbanks, and mountain slopes up to 12,000 feet.  It’s no wonder all parts of this remarkable plant have been harvested for centuries in China and Russia for its medicinal and nutritional benefits.

Sea Berries’ nutritional and medicinal values could fill a book. Briefly, their juiced berries have high concentrations of carotenoids, omega fatty acids, up to 10 times the vitamin C of oranges, strawberries, or kiwis, more vitamin E than wheat germ, vitamins A, B and D, as well as 18 of the 22 amino acids!

Its oil has long been prized in the cosmetics industry for wrinkle reduction and as an antiseptic, a tissue regenerate for burns and a pain reliever.

Although small and light weight (1 gram), a Sea Berry really packs a punch with tangy, citrus-like tartness and tones of passion fruit, mango and apricot.

Growing 6 to 10 feet tall, Sea Berries are dioecious. With male and female flowers produced on separate plants, you’ll need both to produce fruit. Since flowers are wind-pollinated, it’s important to pay attention to the spring wind direction for the planting area.  Mason bees are always a pollinating plus!

Sea Berry plants have narrow, shiny, silvery-green leaves, and as their name implies, rather fierce thorns on many varieties.

Although young plants require irrigation, Sea Berries are also drought-tolerant once established. They’ll also survive -45°F and over 105°F, but fruit best in temperatures in the 90s.

Although easy to care for (sloppy pruning will still give you fruit), the goal is improving branching habit, maintaining an optimum number of new and young fruiting branches, removing old, weak, and dead branches, and increasing light penetration. Keeping the plant at 8 to 9 feet tall makes them more manageable when pruning and harvesting.

Most fruit is born on horizontal second year branches, so in late winter, prune out upward- and downward-facing limbs.

Despite fruiting only on second-year branches, harvesting is most efficient by cutting off the entire branch. You’ll avoid thorns which can make it impossible to pick the berries.

Freezing branches until berries are frozen makes them easy to remove with a fork. Keep frozen berries in zip bags for long storage for juices, jams, smoothies, sorbets, or any recipes to which you might desire to add some vitamin tart-sweet tang.

If you want an ocean of nutritional fruit, set out some Sea Berries.

They have the greatest number of varieties. It’s good to preorder or you’ll need to get on the wait list.

A list of available varieties helps you choose from inventory

About ¾ lb. frozen Sea Berries or 2/3 cup of juice

If not using already juiced berries, bring frozen berries to a gentle boil in water for about 4-5 minutes.  Purée in blender or food processor then strain through a sieve.  Mix juice with honey and let cool.

Sprinkle gelatin over milk and let plump for about 5 minutes.  Stir into juice and heat on medium low until gelatin is dissolved.  Remove from heat and let cool until it starts to thicken a bit.