Currants and gooseberries, members of the genus Ribes, are all hosts of the non-native and virulent fungal pathogen Cronartium ribicola, cause of white pine blister rust. It is called white pine blister rust because it causes lethal cankers on young five-needled pines (also known as white pines due to the light color of the wood) and severely weakens the larger trees by killing tops and branches. This makes them susceptible to later attack by bark beetles.

The fungus was introduced from Europe to North America in the early 1900s when five-needled pine seeds were sent to Europe, grown in nurseries and sent back as seedlings. It appeared on the West Coast in 1910 and spread through forests in the West wherever both five-needled pines and Ribes grew. The disease has contributed to major declines in the population of five-needled pines and has made successful planting of these trees very difficult. 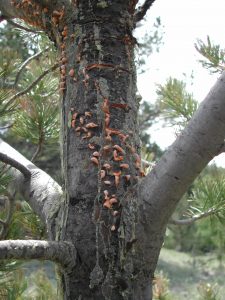 During the 1930s to 1950s there was a great effort made to control the spread of the fungus by eradicating wild gooseberry and currant plants from the forest. The effort failed in the western U.S. largely due to the rough, remote terrain and ability of Ribes to sprout after cutting. Today there are programs in several federal agencies to develop disease-resistant five-needled pines for restoration planting.

In our part of Oregon, there are three native species of five-needled pines, all very susceptible to the fungus. Sugar pines (Pinus lambertiana) are found in mixed conifer forests at middle elevations. A good place to see magnificent large sugar pines is along Highway 62 between Prospect and Union Creek. Western white pines (P. monticola) are found on higher and moister sites, mainly in the Cascades and in the Siskiyous on ultramafic soils. Whitebark pines (P. albicaulis) are found at the highest elevations, most noticeably around the rim of Crater Lake, and in scattered locations near Mt. Ashland and Mt. McLoughlin. We also have several native species of Ribes in our forests including stink currant (Ribes bracteosum), spreading gooseberry (R. divaricatum), prickly currant (R. lacustre), Sierra gooseberry (R. roezlii), red-flowering currant (R. sanguineum) (a popular choice in local gardens for attracting hummingbirds), and sticky currant (R. viscosissimum). All can be hosts of the fungus but stink currant, red-flowering currant, and Sierra gooseberry are particularly susceptible.

The life cycle of Cronartium ribicola is complex and requires both Ribes and five-needled pines to complete. Spores of the fungus spread from five-needled pines to Ribes in spring and back to pines in the fall. Although the spores can travel a long distance when conditions are right, most successful infections occur when Ribes and pines are within one-half mile of one another. On currant and gooseberry plants, both wild native and cultivated varieties, infection by the fungus causes small raised yellow-orange spots containing spores on the underside of the leaves in early to mid-summer. Later in the summer, brownish hair-like spore structures develop in the same area. Severely infected plants may lose all or most of their leaves.

White pine blister rust is not an issue for most gardeners because most of the five-needled pines growing in our local forests are not near where the majority of people are gardening unless you live near Prospect, Butte Falls, the upper elevations of the Applegate Valley or unless you have a five-needled pine in your landscape such as eastern white pine (P. strobus), Swiss stone pine (P. cembra) or Vanderwolf’s Pyramid (P. flexilis). In these situations, blister rust-resistant species or varieties of currants and gooseberries should be chosen. Black currants grown for home gardens are varieties of R. nigrum or R. odoratum. They are more susceptible to infection than red or white currants (R. sativum). However, rust-resistant varieties of black currants are available, including Prince Consort, Minaj Smyriou, Blackdown, and Titiana. Red currant cultivars Viking and Red Dutch are practically immune. Jostaberry is a blister rust-resistant cross between black currant and gooseberry species developed at Oregon State University that has qualities of both species.