Although Monday mornings are my usual time to be at Extension where I help out in the native plants nursery, I stopped by on a Thursday to see what the folks who work that day of the week have been up to. Quite a lot, as it turned out.

Peggy Corum was there getting her first look at the Propagation Garden since Extension shut down last March. She was saddened that many of the plants she’d nurtured had died. However, her able assistants Becky Belau and Sharon Maurin had been able to save most of them and were busy putting that Demonstration Garden back into good shape.

You may recall that Peggy received a “Lifetime Achievement Award” in 2019 for her long service and many contributions to JCMGA. She established Grandma and Grandpa’s Garden back in 1989 as a way to encourage those who’d just completed their Master Gardener classes to stay involved at Extension. (That garden is still there next to Greenhouse 1, but is now called the Birds, Bees and Butterflies Garden.)

Peggy has decided it’s time for a break and will be concentrating on developing the garden at her new home in Ruch, where she says two bucks and a doe serve as lawn ornaments every afternoon. She’s also entertained by seven young chickens that she raised this past winter.

The Garden Enhancements Group (Janine Salvatti, Marcie Katz, and Candy Steely, all Class of 2019) were weeding the fence line behind the Kitchen Garden. Plans are to replace the weeds with something far more attractive, perhaps a hedge of native plants. The previous week, they’d pulled up the fabric covering a path in the Children’s Garden because it was a safety hazard. 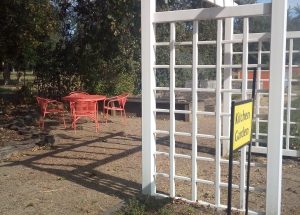 And the week before that, they painted the tables and chairs in the Kitchen Garden which had rusted. They are now a brilliant “coral” and “sea glass” and can be seen from a mile away.

Kari Gies, chair of the Gardens Working Group, and Kate Hassen, who helps coordinate the work of the GEMS (Garden Education Mentors), were having an informal discussion about the Demonstration Gardens. When I asked what they’d been doing in their home lives, I learned that Kari’s family has a small foundation that gives grants to non-profits specializing in the environment, healthy life styles, community history, and justice and equality. The foundation is prioritizing that last effort at this time.

Kate said she and her husband Steve have had more time to concentrate on their vegetable garden this summer. They have been doing successive plantings of potatoes and greens and will be putting in a good-sized fall garden. She’s canning, drying, pickling, and fermenting their produce, and of course donating some to ACCESS by dropping it off at Extension on Wednesday mornings.

Kate’s special interest is succulents. Over the spring and summer, she fostered a large number that had been given to the Practicum, plus some beautiful arrangements created by the students. Many of these will be turned over to a community plant sale whose organizers have pledged to use the proceeds in support of gardening education in the Rogue Valley.