Not just a Jack … O’Lantern 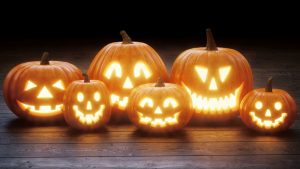 Even if it’s unlikely that you won’t find any little tricksters tempting you to toss them treats this Halloween, it doesn’t mean that you can’t still protect your porch with a glowing, carved pumpkin.

Given all we’ve been through this year, especially the recent losses from fires, it seems we could use a little light of hope even if there’s no longer a porch on which to put it.
Although the decorative carving and consequent transformation of pumpkins into Jack O’Lanterns has been around a long while in our country, did you know that that tradition originated in Ireland?

The name, Jack O’Lantern, as well the practice of decorating such luminaries (originally turnips and potatoes), came about from an old Irish folktale, “The Legend of Stingy Jack.”

The story goes that Stingy Jack invited the Devil to have a drink with him. As his name implies, Stingy Jack convinced the Devil to turn himself into a coin to pay for their drinks but instead kept the coin in his pocket next to a silver cross to keep the Devil from returning to his usual form.

Eventually Jack freed the Devil when he agreed to not bother Jack for a year, or if he should die, that the Devil would not claim his soul. Tricking the Devil again the following year by having him climb a tree to pick a fruit, Jack carved a cross in the tree’s bark to keep the Devil trapped there until he promised not to bother him for ten years.

As the legend goes, after Jack died, and because he was such an unsavory figure, he wasn’t welcomed into heaven by God or into hell by the Devil. So Jack was sent out into the dark night to wander with only a burning coal to light his way. Jack put the coal in a carved-out turnip and he’s been roaming the Earth ever since.

The Irish began referring to this figure as “Jack of the Lantern” and eventually, “Jack O’Lantern.”

So, illuminate (preferably with battery or electric light as it seems we’ve had quite enough flames already) a carved-out pumpkin, turnip or potato this Halloween to bring a glow of hope to what’s been a rather dark year.