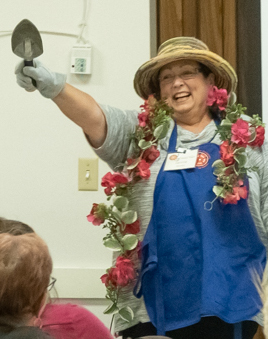 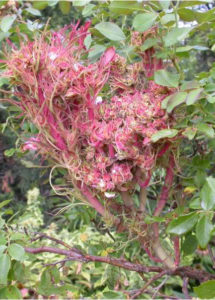 Rose lovers, are you aware of Rose Rosette Disease, RRD? There is no cure for this deforming and highly contagious virus transmitted by wind-blown mites half the length of a grain of salt.

Until yesterday, I had never heard of this disease and I have not heard rose enthusiasts talking about it, probably because it is not yet known to be active in Oregon. However, the nearest occurrence is in Northern California, a little too close to ignore.

The disease reports map shows active RRD outbreaks and the distribution map shows the plant carrier, not the disease itself, as it progressed across the country. The carrier plant is Rosa multiflora. It was heavily planted east of the Cascades as a livestock barrier but found to be a vicious thug.

The virus was cultivated to eradicate the plant and thought to be a threat to only the Rosa multiflora plant. But this biocontrol was worse than the original problem. RRD attacks ANY rose. The virus infects the mites as they chew on the foliage. The wind blows the mites to neighboring rose stock and the infected mites transmit the disease to the roses where they land as well as their offspring. There is no cure.

Expert advice recommends putting a plastic bag over the entire bush and cutting the bush close to ground level. The bag hopefully prevents mites from being disturbed and spread to other roses. The root can then be dug out more easily. Such bushes should never be composted. Trying to address a single cane is not favored due to ease of transmission.

The only bright spot in this is that the virus does not live in the soil. A new rose may be planted immediately.

The virus manifests at the growing tips of the rose plant. Leaves are deformed and are intensely red, sometimes purple. The growth is expressed as a witch’s broom and the canes become very thorny. The flowers have a smashed appearance if they open at all.

Researchers are trialing a number of roses that show some resistance to RRD and successful varieties will become available after multi-year tests.

RRD may not be in Oregon yet and hopefully it never gets here, but it is close by. We need to stay vigilant and be prepared to act quickly.