I hope that the slower days of winter have been relaxing and cozy and that plenty of time was spent with family and loved ones over the holidays.

With my family, I have recently enjoyed the first outings into the snowy winter wonderlands of southwestern Oregon and with the solstice, I got to thinking about which plants have been historically significant around the time of solstice.  Some of this information was featured in my column for the January 2019 Garden Beet column.

The spruce and fir forests are some of my favorite places in southwestern Oregon.  Sacred trees of the winter solstice to cultures in the northern hemisphere include oak, yew, silver fir, birch, and pine. 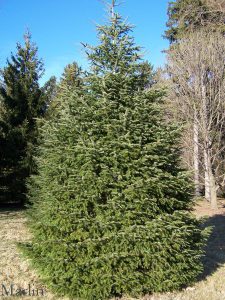 Yew represents death of the old year, while silver fir represents the new year and rebirth.  Birch also symbolizes new beginnings.  Pines are for peace, healing, and joy; conifers in general were a symbol of the continuity of life and prosperity.  Oak symbolizes eternal life, protection, and strength, and was the traditional type of tree used as a yule log.  Yule logs were burned for 12 days, and their ashes were scattered afterwards over fields for health and a bountiful harvest.

Perhaps the most interesting botanical story around the winter solstice (in my opinion) and Christmas is that of the fly agaric (Amanita muscaria) mushroom. 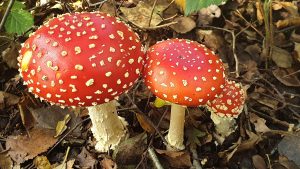 This Old World mushroom is thought to be the foundation of the story of Santa Claus and his flying reindeer.

In northern Europe and Asia, this fungi typically appears underneath firs and spruce in the days leading up to the winter solstice.  Shamans from these regions would dress in special red garments trimmed with white fur and black boots (sound familiar?) to collect these mushrooms.  Upon returning to the village, they would enter their yurts through the smoke hole, as this was the portal to the spirit world.  When the mushrooms were ingested, one’s face would flush (think rosy cheeks and noses) and gave a sense of well-being, visions, and even the feeling of flying, as the Sami (Laplander) people would say when riding on their sleighs with reindeer.  The reindeer from these northern regions even have a documented taste for the fungi.  In addition to being shared as gifts, dried fly agaric mushrooms were historically strung with popcorn and cranberries as mid-winter decorations. Depending on how these mushrooms are cooked, they can impart some hallucinogenic side effects.

With the winter solstice past, enjoy the coming longer days and continued beauty of winter!